5 Things Your Home Inspector Might Find in an Older Home

The Hampton Roads area is host to a myriad of homes ranging from 19th Century Colonials with crawl spaces, to modern beach houses on pilings. In Norfolk and Portsmouth for instance some of the older homes have building features that are antiquated and certainly not code-compliant by today’s construction standards. In most cases it comes with the territory and the buyer can live with it knowing they are buying an older home. Your Home inspector is not a code inspector, however when we encounter these older features we usually note their presence in the report. Following is a list of 5 things your home inspector might find when inspecting an older home. In this blog I’ve concentrated on ones that a home inspection might find when inspecting areas not easily seen or frequented by the home owner on a daily basis such as the attic or crawl-space.

Used in homes from about 1880 through the 1940’s, knob-and-tube (K&T) wiring is now considered obsolete. The wiring itself is not actually dangerous, the danger arises when it is improperly modified, and when insulation covers the wires.  In these cases it could pose a safety or fire hazard. Because it has no ground wire, it cannot service any 3-prong appliances. Even though considered obsolete by today’s standards and not allowed in new construction, code does not call for it’s removal. Interestingly the porcelain components have an almost unlimited lifespan and knob and tube wiring is often considered superior to modern Romex wiring. If it is present, it is noted in the home inspectors reporting and the home buyer may choose to have it evaluated by a qualified electrician. 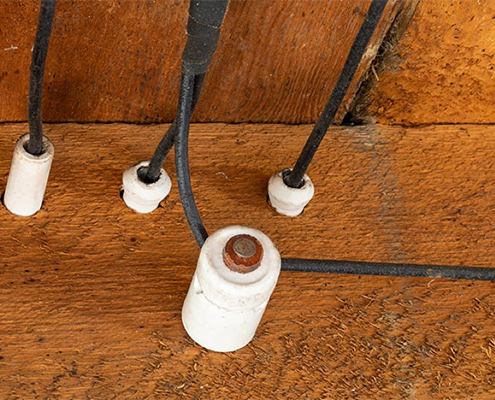 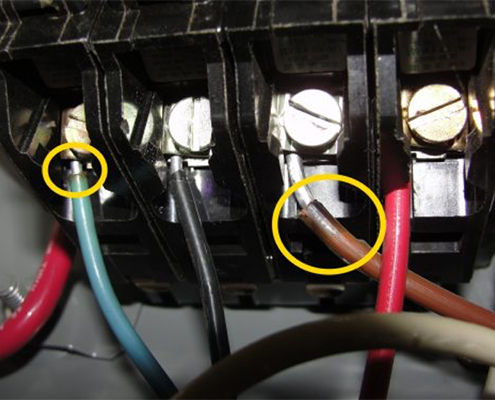 Federal Pacific Electric “ Stab-Lok” service panels were installed in millions of homes between the 1950’s and 1980’s.  The stab-lok breakers can fail to trip when faced with an overcurrent or short circuit, posing a potential hazard. The breakers are also susceptible to jamming in certain conditions. It is important to note that Federal Pacific is no longer in business. While these panels and breakers can operate properly for years, they can malfunction causing the panel to overheat, creating a hazard.  The presence of an FPE Panel should be noted by the home inspector and different inspectors have different recommendations in their reports, but evaluation by a qualified electrician may be advised. 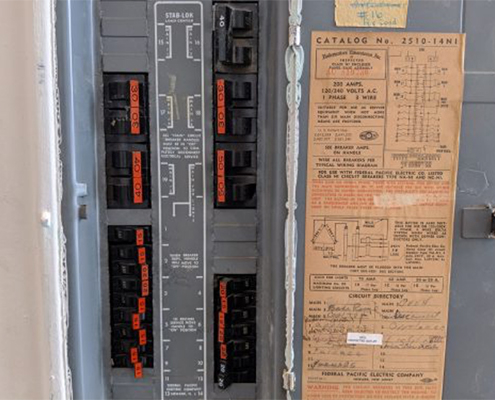 If you watch TV you’ve undoubtedly seen the law office commercial offering to represent individuals exposed to asbestos and indicating it as a serious health hazard. It is vital to note that this is directed towards those who worked in factories and shipyards breathing high levels of the asbestos fibers. Some houses built between 1930 and 1950 may have used asbestos insulation wrapping hot water and steam pipes, boilers and furnace ducts. When present, it is generally located in the crawl-space, basement, utility room and attic of a home. If you have asbestos in your home don’t panic. Generally speaking if it is in good shape, do nothing! as there is no danger unless the asbestos is disturbed and the fibers are released into the air and subsequently inhaled into the lungs.   Do not attempt to repair or remove. If the presence of asbestos is suspected during a home inspection, the home inspector will report this and make recommendations based on visual observations.

Cast Iron drain and sewage pipes were used in home construction up until about 1980 when PVC was introduced.  They are commonly seen when inspecting the crawl space and are often buried as they slope toward the sewer main.  This is another case of  “it comes with the territory” as most houses with these pipes have existed with no problem.  In fact some inspectors have reported seeing 150 year old cast iron pipes without any flaws. However cast Iron pipes rust from the inside out so it is nearly impossible to visually detect a problem unless of course an active leak is observed.   If a leak is discovered and/or drainage problems are suspected, evaluation by a qualified plumber would be recommended and a subsequent sewer scan might be advised. 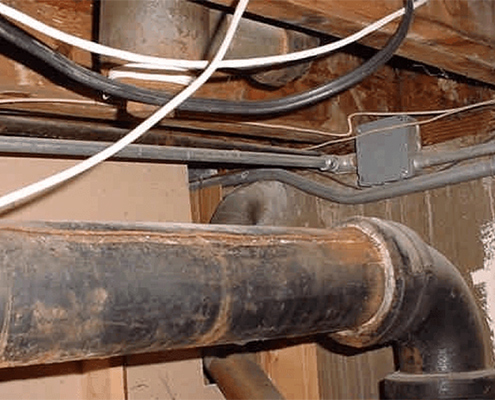 Find Out What’s in Your Home

If you are curious about your home, or a home you plan to buy, a home inspection can help you rest easy. Get in touch with a Summit Home Inspection expert by calling 757-636-3525 and one of our professionally certified, licensed, and insured home inspectors can assist you.

Want to join the discussion?
Feel free to contribute!

You‘re not just buying an inspection.

You’re investing in peace of mind.

We love hearing from you anytime! Call, text, or email us if you have any questions or use the online scheduler to set up a home inspection.

Why Should You Hire a Home Inspector?

The Pros of a Pre-List Home Inspection Scroll to top